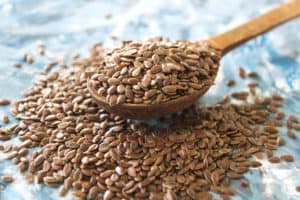 If you were given only one choice of a food to take as medicine, your best choice would be the tiny seeds from flax. Flaxseeds have more potent medicinal qualities—especially those that fight breast cancer—than any other known edible plant. This small seed provides a fortress of protection against breast cancer as well as many other health ailments.

The intelligence contained in flax is so spectacular that it coordinates a sensational offense against breast cancer. Flax has three notable distinctions. First, it’s the richest plant source of omega-3 fatty acids. Research has found that women who eat the highest amounts of omega-3s
have the lowest risk of breast cancer.

Omega-3 fatty acids help to lower the risk of breast cancer by quieting inflammation and bydecreasing the rate at which breast cells divide in response to estrogen. Inflammation is a key factor in the initiation and progression of a variety of diseases including heart disease,rheumatoid arthritis, skin diseases, and cancers such as breast cancer. If you have breast cancer,omega-3s have been found to help shrink breast tumors and prevent them from spreading toother parts of the body.

I recommend taking one to two tablespoon’s a day of organic flax oil. My favorite brand is Barlean’s Organic Oils because their products are produced with the highest quality standards: they are organically grown and produced, freshly made, contained in dark bottles to protect them
from sunlight, and stamped with an expiration date. Barlean’s Organic Oils come many different flavors including a delicious “Omega Swirl” which includes flavored yogurt and tastes like a fruit smoothie.

The second exceptional quality of flax has to do with something called “lignans.” Lignans are natural plant compounds that help to give stiffness to the structure of plants. They also possess extraordinary anticancer properties with an astonishing ability to help protect against and fight breast cancer. Lignans are found abundantly in certain fruits, vegetables, beans, seeds, and legumes—for example, garlic, carrots, broccoli, asparagus, dried apricots, and prunes. But, the amount of lignans in these plants is miniscule compared to that in flaxseeds. Flaxseeds contain at least 100 times more lignans than any other known edible plant!

Lignans deter and arrest the growth of breast cancer in a multitude of ways. First, they act as a weak estrogen and block strong cancer-promoting estrogens from attaching to the estrogen receptors in the breast. Second, lignans change the structure of the breast making it more resistant to toxins that induce cancer. Third, if you have breast cancer, lignans can stop the tumor cells from growing and help to prevent the metastasis of your tumor. They do this by decreasing two growth factors that fuel the fires of breast cancer: insulin-like growth factor (IGF-1) and something called “epidermal growth factor.” IGF-1 is thought to be one of the most dangerous and potent risk factors for breast and prostate cancer.

There is another cancer-enhancing growth factor that lignans thwart, called “vascular endothelial growth factor” (VEGF). VEGF stimulates new blood vessels to grow. In order for a tumor to grow larger, it needs more nutrients–nutrients that can only be delivered by new blood vessels. So the more blood vessels that grow into a tumor, the more food that is delivered to it, and the faster it will grow. On the contrary, without new blood vessels, tumors can’t grow larger. Cancer specialists recently discovered that this anticancer tactic used by lignans–blocking VEGF–is so powerful at stopping tumor growth that they have created anticancer drugs that work this same way. The first type of this drug, called Avastin (bevacizumab), was released on the market in 2004. It was approved for the treatment of metastatic colon cancer and must be given in combination with another chemotherapy drug called 5-FU.

Lignans have several additional ways that they reduce the risk of breast cancer. They create more of the “good” protective kind of estrogen and less of the “bad” cancer-promoting type. They also reduce the production of estrogen in fat cells by blocking the aromatase enzyme. Aromatase converts androgens to estrogens (The anti-breast cancer drug Arimidex works in the same way). According to a 1993 study from the University of Rochester, lignan-rich flaxseeds also lengthen the menstrual cycle. For example, if a woman has a menstrual period every 28 days and then starts consuming flaxseeds, her cycles may lengthen to every 32 days. The longer your menstrual cycles are, the fewer the number of cycles you will have over your lifetime, and the less estradiol you will produce. Simply put, the longer your menstrual cycles are, the lower your risk of breast cancer is.

All of the very effective schemes that lignans use to combat breast cancer add up to lots of protection. Research shows that women with the highest amounts of lignans in their urine—a reflection of how much they consume in their diet—have the lowest risk of breast cancer.

Brevail is made of isolated, purified, and concentrated lignans from flaxseed. The dose in one daily capsule was strategically designed to create levels of lignans in the body that are in the same range as that found in women with the lowest risk of breast cancer. There are two major benefits to taking supplemental lignans. First, the amount of lignans in flax can vary from crop to crop by as much as 300 percent, whereas those in the supplement are standardized so you always get the optimal amount. Secondly, studies show that the lignans in Brevail are absorbed eighteen times more effectively than they are from ground flaxseed. So, taking lignans in this supplemental form guarantees that you get the healthiest dose of lignans every day. Brevail is not recommended for women who are pregnant or currently breast feeding, not because it isn’t safe, but because no studies have been conducted yet on this special group of women to analyze the effects and proper dose.

Taking Brevail with other cancer drugs is also not recommended because this product hasn’t been studied in women currently undergoing cancer treatment. However, that may change in the near future. A study published in the journal Breast Cancer Research and Treatment in July 2003 found that lignans enhance the effectiveness of the common cancer medication Tamoxifen. Researchers J. Chen and Lillian Thompson found that lignans and Tamoxifen, alone and—better yet—in combination, reduce the ability of estrogen-receptor-negative tumor cells to stick together, invade, and migrate—all important properties in cancer’s ability to grow and spread. More research is needed to determine the exact role this supplement may play in cancer treatment.

Brevail is standardized to one type of lignan found in flax, ecoisolariciresinol diglycoside” (SDG). Of all the lignans found in flax, SDG is the one found in the highest amounts and is possibly the most potent. If you decide to take Brevail, I think it’s a good idea to eat flaxseed, too. In addition to the advantages of lignans, flax has many other anticancer properties that you wouldn’t want to miss out on.

It is recommended to eat at least 3 tablespoons of ground flaxseeds a day. To eat them, you must first grind them in a coffee grinder until they become a fine nutty powder because the hard seeds can’t be digested. Add the ground seeds to just about anything you like: vegetable dishes, salads,smoothies, baked goods such as muffins, and cereal.

Not Just for Cancer Protection

Research shows that flax lignans have many other health benefits besides protecting against cancer. They lower blood pressure, decrease total cholesterol and the “bad” kind of cholesterol LDL while raising the good kind of cholesterol HDL, prevent blockages in arteries, and protect
against diabetes by improving blood glucose and insulin resistance.

Lignans also have strong anti-inflammatory and antioxidant properties. Both inflammation and oxygen free radicals have been found to contribute to the initiation and acceleration of most chronic disorders from arthritis, to dementia and cancer. So theoretically lignans should be helpful for most chronic disorders. For instance, a study from the Netherlands found that women who consume plenty of lignans have better cognitive function.

With all of the extraordinary healing properties packed in these tiny seeds, it’s easy to understand why the World Health Organization declared flax seeds a “superfood” and why I recommend them for everyone!